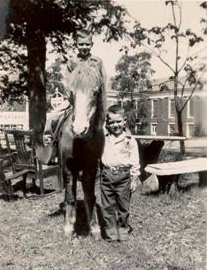 Sammy Robertson astride “Binki” the Shetland Pony. Younger Brother Ronnie is alongside. Siloam Baptist Church and the Pam Am Station are shown in the background. You can see the Pan Am sign just to the left of Binki’s head.

The Twins, a pony, a dog, and a birthday party to remember.

The very first people that I remember socializing with outside of my family is a set of twins who, at the time lived just up the street from me a little closer to the center of the small town of Marion Alabama. Their names are Jimmy and Sammy Robertson, though nowadays they go by Jim and Sam. For some reason I can’t get used to that though. They will always be Jimmy and Sammy to me, and I suppose I will always be “Wesley” to them instead of “Wes” as I am now known to most other people that know me outside of Marion.

My first remembrance of playing together is one of riding tricycles in the side-yard of my house on Centerville Street. My Daddy had built us a new driveway by filling in a steep area on the side of the house with *bricks and rubble, then smoothing it out and packing it down pretty good. It provided us with a good ramp to roll down all the way to the backyard. I later learned to ride a bike on that very same driveway. My sister Ginny was kind enough to talk me into sitting astride her bicycle so she could give it a good hard shove – never mind that my feet didn’t touch the ground.

Time went along, seasons came and went, tricycles and hide-and-go-seek evolved into bicycles, baseball, dodge ball, and all the other games children play. Then, suddenly, the twins were gone! They had moved a long way off – clear across town – something like a mile away! All was not lost however, Jimmy and Sammy’s parents were good civic minded people so it wasn’t long before their Mother, Mrs. Dorothy Robertson, became one of the Den Mothers for Cub Scout Pack 122 and helped put it into full swing. Somewhere along the way I joined up. By my doing that I remained in contact with “The Twins” as they were always called – Marion being too small a town to claim more than one set, at least as far as I knew at the time.

Being a member of Den 122, and also a former close neighbor I suppose led to my being included in birthday party invitations. A particularly memorable party was The Twins tenth birthday. One of the presents they received was every little boys dream – a pony – yep, that’s right, a real living, breathing pony. “Binki” was the pony’s name. He was a Shetland breed, brown and white, with a long beautiful mane, and was equipped with a real genuine western style saddle – covered stirrups and all. There is little doubt that The Twins were the envy of every boy in and around Marion – certainly to all of the party attendees.

As the party went along rides were allowed to the kids. I don’t remember where in the rotation I came up but given what I am about to relate to you there is a good chance I was the last one – at least for that day. This was because of another party attendee that got a little too involved in the festivities. I had just climbed aboard Binki, and was about to be led around the yard by one of the adults I suppose. The reason I suppose this is because the reins were hanging down in front of Binki – as in – not in my possession. Not that that would have mattered, I wouldn’t have known what to do with them if I had had them anyway. I had never even sat upon a horse – much less ridden one.

Enter the already alluded to but not yet introduced “other attendee” – The Twins dog “Man.” Man was a playful, rambunctious collie mix. I don’t think Man cared too much for his new member of the family – and I will here report that it may have been that Man didn’t care too much for me either. There’s a pretty good chance that’s me on the ground beneath Man in the picture below.

Just as I settled into the saddle and inserted my feet into the stirrups Man decided that then would be a good time to express his displeasure to the newest member of the Robertson family, and possibly to me too, by setting up a barking fit that would do justice to a city dog pound at feeding time. 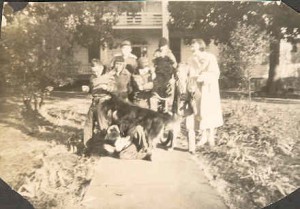 “Man” the collie dog is trouncing on someone, and there’s a real good chance it’s me. The Barker House is in the background.

That did it. Binki was spooked. Spooked bad. Off we went – the pony, me, and the dog. The thing tore out across a good part of Marion with me aboard. Across streets, sidewalks, and other hard surfaces we flew. Man was doing a good job of keeping up the pace by continuing to bark while staying in close, hot pursuit. I was holding on to the saddle horn for dear life. I’m sure anyone observing from the rear would have thought I looked like **Johnny Mack Brown on his best day; to someone with a frontal view I probably would have looked just exactly like what I was – a nine year old boy that was scared half to death. I suppose I was hoping the thing would run out of gas or at least trip over the reins, or maybe I just wasn’t thinking at all. My options weren’t looking too good.

Finally the soft green campus of Marion’s own Judson College hove into view. The pony was still at a dead run though. I instantly formed a plan. Once we had covered a couple of hundred feet of the campus – and I didn’t see any concrete within reasonable striking distance – I bailed off! As I recall, I rolled and bounced somewhere between two and two-hundred feet, came to a stop and quickly sprang up in time to catch a final glimpse of both of the pony’s rear feet kicked up in the air, wildly flapping tail, and the rest of his rear quarters disappearing from view as it continued at a full gallop into the interior of Judson’s campus.

It was probably only a matter of a minute or two before I was retrieved by a posse of nine and ten year old children led by Mother Robertson. Aside from my feelings I was unhurt. I haven’t seen the pony since. I’m sure I saw the dog after that. I never blamed the dog. And I still like DOGS.

*The bricks and rubble I refer to were from the remains of Judson College’s Jewett Hall that, in 1947, was completely destroyed by fire caused by a lightning strike. I was four years old at the time and can still remember standing on my front porch about one mile from the scene watching the glow from the fire in the night air.

A fund raiser was held to rebuild the structure. Governor “Big Jim Folsom” is reported to have paid $25 for the first brick sold. I am sure Daddy paid a little something for the two or three dump truck loads of brick and other rubble he built the driveway with but I’m certain he didn’t pay $25 per brick! The 1947 fire was actually the second burning of the building. It had been destroyed by fire once before in 1888.

**Johnny Mack Brown was a silver screen cowboy star of that era. He was a native of Dothan Alabama and had been a star player on the University of Alabama football team that won the 1926 Rose Bowl.