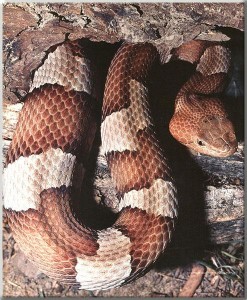 In the first of these few short essays about snakes I told you about a somewhat humorous engagement I had with a common coachwhip when I was a small child. My next encounter with a snake was one that, at least to me, was not at all humorous and in fact had a degree of danger attending it. I will tell you about it by beginning this way:The surveying of property occasionally requires the “running out” of boundary lines that define a parcel of land. This is done by measuring directly along the lines from one property marker to another. These lines are often difficult to measure along because of dense underbrush and trees obstructing the course. This kind of situation requires the use of hand tools such as bush hooks, machetes, and ditch bank blades.

A ditch bank blade is sometimes called a * “kaiser blade” or “bush axe”. “Back in the day” so to speak, a crew of four men, with only two men cutting, were expected to cut out and accurately measure at least one mile of line per day regardless of how dense the undergrowth, or how big or how many trees there might be. On occasion the need would arise to leave off the cutting out of a line near the end of a work day and resume work on it again the following morning, or whenever the next work day happened to be.

This being the case surveyors have always counseled one another to be watchful for snakes, and to make plenty of noise when going back onto a cut line after having worked along it on a previous day. The idea being that snakes will lie along the line to bask in the warm morning sun, and that whatever snakes might be in a state of trespass upon the line at that time will sense your arrival by whatever mechanism they are equipped with to do such a thing and will slither away. Snakes, I am told are not much for socializing.

Whether snakes in fact enjoy taking the morning sun is true or not is something I don’t know but that is what the counsel has always been among surveyors, at least ever since I have been one. Now so far all of that sounds like pretty good advice except for one small detail; it’s that slither away part. It doesn’t work for copperheads. They can’t – at least not right away. Nature did not equip them to do such a thing as their first line of defense.

Nature it seems never took into account that a party of ordinarily sane surveyors would from time to time go stumbling about in the wilderness swinging sharp tools, knocking down trees, bushes, briars, kudzu, or anything else that might obstruct their line of sight along a boundary line they intend to measure. This lack of accounting has left the copperhead with a characteristic that does not very well accommodate the habits of either modern man or the copperhead. 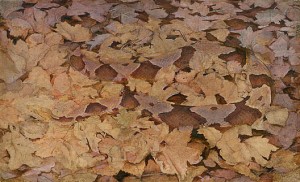 Copperheads, unlike other snakes, don’t always run from danger. They rely upon the camouflage appearance of their skin, and instead of running away as most any other self respecting snake is likely to do, they – freeze. They generally freeze until they are quite literally stepped on or are stepped so close to that, in their opinion, they must strike out in self defense.

This contrary behavior sets up a most disagreeable circumstance for a land surveyor – copperheads don’t buzz like a rattlesnake, they don’t run like a moccasin, and you can’t see them because of their camouflage. Though their bite is rarely fatal, if it does bite, it can be very serious business. It’s as simple as this: If they happen to be where you are going you could very easily get into trouble.

Sometime during the summer of 1966, I was afforded the opportunity of learning all about this behavior through first hand observation while clearing a line through dense undergrowth in a forest of mixed deciduous and evergreen trees in the vicinity of Demopolis Alabama.

It happened that we had left off the clearing of a line from the previous day and had returned to the job site the next morning to resume our business. As I recall, our entire Survey Crew consisting of Party Chief, Tom McCray; Instrumentman, Skip Gentle; Rodmen, Jim Brazier, Mark Gilliland, and me were all walking in single file one behind the other returning to the end point of the line we had left off clearing the previous day.

Though I do not positively remember the exact order, It is likely that Tom McCray would have been leading the way, perhaps with a machete in hand to cut small brush out of the way that had bent over onto the line because of being weighted down by the morning dew. Skip would probably have been right behind him carrying the surveying instrument on his shoulder. Mark was definitely behind Skip and I know I was I was directly behind Mark. Jim, who always seemed to carry the stake bag, sledge hammer, and range pole, would most likely have been bringing up the rear – joking and being his always pleasant and jovial self all the way along.

It is most likely that I would have been carrying a bush hook as that has always been my favorite cutting tool. Mark was carrying what we then called a “bush axe” though some old timers referred to that type of tool as a kaiser blade. Mark was undoubtedly knocking hanging brush out of the way that Tom had left behind, thus cleaning up the line a little more so Skip would have a clear view back along the line after he set his instrument up.

As we walked along the line, either Skip stepped on or too close to a frozen copperhead that lay alongside our path, or it might have been that Mark’s kaiser blade landed near it as he cut through a bush. Whatever the case was, a very large copperhead resorted to its next line of defense by lunging out crossways between Skip and Mark, either with the intent of striking one or the other of them or to simply run away in the most convenient direction.

If it did have the intent of biting one of them it missed, and if it only intended to escape, it didn’t get very far. I am very sure the thought of: “the snake is running – leave it alone – you are safe” never once went through Mark Gilliland’s mind. I think he thought: “there is a snake and it needs killing in the worst kind of way.” Quick as a wink he set about the business of doing so by striking downward with his bush axe while reaching way out to his left.

The snake had already made some good ground in an effort to escape but not far enough to avoid being struck by Mark’s downstroke. Unfortunately for Mark the stroke only cut the snake longways about the middle of it’s fat body. Even though Mark struck at the snake at a very severe angle the thing would have probably been cut in half and at least rendered nearly immobile had it not been for the fact that he struck with the hook side of the bush axe pointed down.

That was not a good thing; the ground stopped the downward movement of the implement before it could cut all the way through the body of the snake. The end result of that little activity was that Mark then had a very angry copperhead to deal with. The thing instantly turned and charged Mark.

I’ll have to say the creature put up a valiant fight but it really didn’t stand a chance, especially after having already been severely injured. It got in close enough to raise up a couple of times and make a few head bobs in an effort to strike, but Mark was now the one in full survival mode. In about half a second he had that kaiser blade going so fast it looked like a circular saw and just about before you could bat your eyes a couple of times he had the thing cut into about a thousand pieces.

Snake parts were hanging off of bushes and laying all over the place. It was a gruesome sight. The thing looked more like it had been blown up from the inside by a hand grenade rather than being cut up.

As for me, I stood stock still and watched. For all I knew there could be yet another copperhead close by so I wasn’t going to make a move at the risk of adding another party to the fight, and I for sure wasn’t going to step up and help Mark. I guess I figured that I stood about an equal chance of being bitten by the snake or decapitated by the kaiser blade so the best thing to do was to do nothing.

With that I conclude my story about a somewhat frightening experience with a copperhead, and invite you to continue your education of the history of my experiences with snakes when it is convenient for you to do so, by turning your attention to the posting titled “A Prairie Rattler And A New World Record.” There I will tell you all about my first personal meeting with Mr. Rattler. 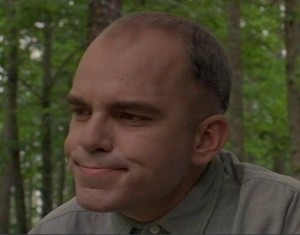 Actor Billy Bob Thornton as he portrayed the character Karl Childers in the 1996 movie "Sling Blade."

*Billy Bob Thornton later made the term “kaiser blade” popular in the movie “Sling Blade.” The line in the movie went like this:

“I picked up a kaiser blade that was a layin’ there by the screen door, some folks calls it a sling blade, I call it a kaiser blade. . . .”

Interestingly, prior to my watching the movie only a few years ago I don’t remember ever hearing it being referred to as a “sling blade” – or for that matter, by its manufacturers official name; “ditch bank blade.” I believe I have always heard it referred to as a bush axe or a kaiser blade – nothing else. Billy Bob Thornton is nearly as old as I am and has as much rural background as I do, so if he says that it was alternately called a “sling blade” I’m fine with that too.

← The Coachwhip And The Funeral Incident
The Great Shetland Pony Incident →