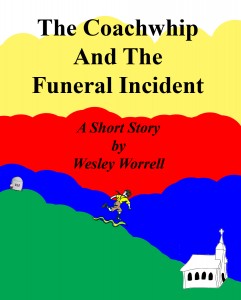 Aside from being struck at and nearly bitten on the leg by a snake on one occasion, and on another occasion, being positioned quite literally face-to-face, and within easy striking distance of a coiled up buzzing rattlesnake, I have never really had much trouble with snakes.

So it is with that brief preamble, intended to ease you into understanding in advance that you will not be subjected to reading about wild and horrific tales, that I invite you to continue reading this first of a few short essays that chronicle some of my experiences with snakes.

The first disagreeable business I ever had with a snake was one of attending a graveside funeral service when I was about four years old. Though it is a dim memory to me, I can recall enough of the event to piece it together with accounts later told to me by family members so that all of the following is a truthful report about the ocassion. The story begins thus:

It happened that my family and I were leaving the service spoken about in the previous paragraph with me leading the way, when a so called “coachwhip” snake that was lying or traveling alongside the same footpath I was walking upon decided to challenge me to a foot race. Not that the contest was any kind of prearranged event mind you; the probability is that I came upon the snake from behind and we startled each other into breaking into a dead run, each of us trying to escape the company of the other while being disadvantaged by going the same direction at the same time.

It was later reported to me that the snake and I stayed in convoy for a considerable amount of time – it, I am told, whipping in and out from between my legs as we ran along. I have been told that there was no clear winner to the contest for we both disappeared from sight of all the witnesses as we passed a church something less than a mile downhill from the graveyard. The last vision anyone had of the snake and me together was one of me in mid stride, at an altitude of a little less than three feet above the ground, and still accelerating – not quite up to forty miles an hour, but gaining on it all the time.

Though there may not have been a clear winner to the race, I can assure you that if points for trampling had been included in the contest rules the snake would have lost by a wide margin. Between the time we set off, to the time we bade each other farewell I don’t believe either of my feet landed once without the snake being between some part of my shoe leather and the ground.

When all was said and done I’m sure the snake was as exhausted by the exercise as I probably was but I’ll lay pretty good odds it was feeling a whole lot more beat up than me. Throughout the duration of the derby one of my feet had to have hit the ground something under every twenty feet or so, and every time it did the snake had the misfortune of having some part of its body in the way – everywhere I went it was sure to go, and everywhere the snake tried to go I arrived an instant later – right on top of it. We just couldn’t get away from each other. I’m quite sure the snake was unhappy with the outcome, for even a four year old carries enough weight to pummel and bruise up a small skinny snake pretty good.

Since it is not my nature to trump up and embellish a story in an effort to round it off and put an ending to it that I have no remembrance or knowledge of, I will leave off the business of the coachwhip by saying that the snake and I must simply have reached an armistice. One that remains unsettled to this very day.

With that I conclude my report to you concerning the coachwhip and the funeral incident, and now go on to inform you that in the installment titled “The Copperhead And The Kaiser Blade Incident” you can learn about about a less humorous, and in fact somewhat dangerous meeting I witnessed when I was next in close company with the creature that Genesis reports God cursed above all cattle and above every beast of the field.

← Sam The Sheepdog
The Copperhead And The Kaiser Blade Incident →