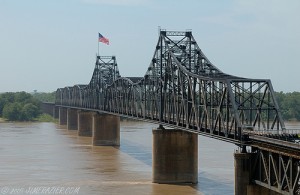 The Old Vicksburg Bridge. The current passing through the 800' wide navigation channel lying within the 825' open span is very swift. This is evidenced by the current eddies that can be seen downstream of the span piers. For a better view you can click on the picture to enlarge it. This picture is a copyrighted work of Jim Frazier and is used under the principle of creative commons.

1965 and 1966 often found me as a backseat passenger in a Ford Station Wagon traveling through and all around the states of Alabama, Georgia, Louisiana, and Mississippi. At the time I was employed as a Rodman for a survey crew operated by Southern Natural Gas Company headquartered in Birmingham Alabama.

Interstate Highway construction was going on in a big way all over the United States at that time and we were often called upon to go to a site here or there to survey the location of one of our existing gas lines, return to Birmingham and draw up a map showing the highway plans superimposed upon it. This was done so that decisions could be made about how the gas line could be moved one place or another or lowered a sufficient amount to accommodate the road that was to be built above or near it.

So it was that in the fall of 1966 we were given the task of locating gas lines that passed through a levee for the Mississippi River a few miles into the eastern edge of Louisiana, directly west of the City of Vicksburg Mississippi.

The proposed route for I-20 through that region called for a new bridge to be built just south and close alongside the old combination highway and railroad bridge over which automobile traffic flowing along US 80 traveled. The old bridge is now closed to automobile traffic but remains in use today by the Kansas City Southern Railway carrying traffic across Louisiana, and into and out of Metropolitan Vicksburg Mississippi.

It was directly beside this old bridge that I stood on a small sandbar strewn with rocks, driftwood, and other stranded river flotsam, to observe one of the most remarkable feats of human daring and endurance that I have ever witnessed.

The two principal participants in the proceedings were Party Chief Tom McCray and Rodman Keith Wright. In addition to myself, a cast of characters that were primarily observers was: Instrumentman “Skip” Gentle, Instrumentman Jim Brazier, and Rodman Mark Gilliland. I will tell you the story in as understandable a way as I can by proceeding thus:

Most of our crew had met up at Tom McCray’s house in Birmingham early one morning in late September or early October, piled our personal gear and ourselves into the blue Ford company station wagon that was our survey vehicle in that day, and set forth for the work site a few miles into Louisiana. Instrumentman Skip Gentle met up with us somewhere in the Birmingham area so that he could travel in caravan with us in a separate station wagon.

In those days, with only short sections of the interstate highways in place, a trip from Birmingham to Vicksburg occupied a good part of the day. Our plan was to travel directly to the work site stopping only for necessary breaks along the way and to take lunch and register at a motel once we arrived in Vicksburg. This was so that we could arrive with enough time left before darkness fell in order to reconnoiter the site so to lay a plan for our work activities the following day.

As one can imagine, in a car full of people traveling that far, conversations would go on about a variety of subjects. In this case, on this trip, most of the talk consisted of a lot of verbal jousting with Keith, and most of that was between Keith and Tom.

As I recall Keith was about twenty years old, brand new on the crew, and had never been outside of the state of Alabama. Keith however was rough business, physically and verbally. He was a well built short stocky young man who had been an underground coal mine surveyor. That alone speaks to his physical ability – he was strong and tough.

He could give as good or better than he got verbally. Throughout the trip Tom would throw chiding, sometimes too edgy or seemingly unkind remarks to him having to do with what Tom perceived to be a lack of sophistication about things more worldly than the coal mining community Keith grew up in. Keith wouldn’t back down an inch. He would always come back with some remark or tale to outdo Tom. We never quite knew whether to believe him or not. He was boastful in an almost outrageous kind of way yet he was somehow a very likable person.

Somewhere along the way the subject of the Mississippi River came up. This of course was new fodder for both Tom and Keith. Tom trying to impress upon Keith that he really hadn’t seen a river until he had seen “Big Muddy.” Keith of course holding forth that nothing called a river could be as big as all that, that the Black Warrior River near his home was as big as rivers get and that the Mississippi would be called something other than a river if it were all Tom made it out to be.

And on it went, mile after mile, after mile. Tom not giving up the futility of trying to impress the grandeur of the Mississippi River upon a boy who had never seen any kind of watercourse larger than a relatively small river during a spring flood. Keith throwing everything Tom said back to him in spades, all the while, all of us thoroughly enjoying the verbal sparring every mile of the distance to Vicksburg. 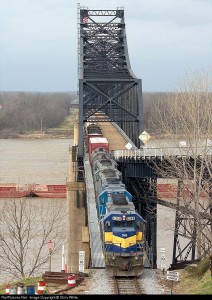 Dakota Minnesota Eastern Locomotive Number 6368 running over the kansas City Southern Railroad leads the *Shreveport to Meridian Manifest off of The Old Vicksburg Bridge. Notice the down-ramp on the right. It is a part of old US 80. The small beach alluded to in the story can be seen just left of the bridge on the other side of the river. This view is looking straight west. Photograph used with the permission of Chris White, Photographer.

Sometime during the mid afternoon we arrived on the outskirts of Vicksburg and began our travel thorough the city along US Highway 80, only stopping long enough to register at a motel and also to have a late lunch in the cafe on the premises. Continuing our journey we eventually arrived at the old river bridge earlier spoken about. The bridge had an unusual approach built onto it; one had to pass through an entrance structure and go down a ramp of sorts in order to land upon the level surface of the bridge – some one hundred fifteen feet above the surface of the water.

As Tom made the approach down the ramp, all of the magnificence of the mighty river hove into view. With that Tom exclaimed, “There Keith! What do you say now!” – Keith, quick as a wink shot back, “Huh! I thought I was gonna get to see something – that ain’t nothing but a little old mud puddle, why, I’d swim across that thing if . . .” – He never finished the sentence.

That was far more than Tom McCray could stand. Tom shouted, “I’m gonna shut you up once and for all!” At the same time he was furiously wrestling his billfold out of his back pocket with his right hand while holding the steering wheel with his left. In an instant he, still steering with his left hand but now also clutching his wallet with it, tore some folding money out of it and laid it back over his shoulder onto the top of the seat-back. “There!” he exclaimed, “Put your money where your mouth is!” Keith, not pausing or batting an eye ask, “anybody else?”

Whether additional bets were taken at that time by others in the car or were negotiated later is beyond my memory and knowledge. I know that I did not wager anything at all. This was not necessarily because I had any objection to it on the grounds that the proposed activity was obviously life threatening, though I like to think that had something to do with it. It was probably more because I didn’t have the money.

Our journey continued on across the river and a mile or two farther west until we came to our designated work-site. We spent only a short time there. It was late in the year, the days were short and sundown wasn’t far off. Tom was anxious to get back to the river so that the wager could be carried off. 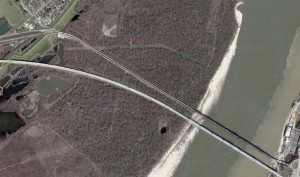 If one carefully examines an aerial map of the western approaches of I-20 and Old US 80 to the Mississippi River, parts of the small dirt lane we drove down to gain access to the river can still be seen between the Interstate on the south and the old bridge to the north. Though high water obscures a view of it on the aerial photograph I recently viewed, at the end of the dirt lane was the small sandy beach I earlier alluded to. It was there that we arrived and disembarked from our vehicles just as shadows were at their longest and the sun was only minutes from touching the horizon.

I believe Skip and Jim immediately began skipping rocks as was their custom if any kind of smooth water and a collection of rocks were within a hundred yards of each other. They drifted off a little south along the small beach. I don’t know if they were trying to distance themselves from what was about to happen or if there were just flatter skipping rocks that direction. Tom and Keith ambled off east toward what looked like a good entry point at the waters edge and almost directly under the edge of the bridge high above them. Mark and I hung back, still within earshot, but nearer to the end of the road. This was probably for no other reason than, at least for me, it was usually always a pretty good idea to not interfere with anything Tom was up to.

I distinctly heard Tom say, “There you are big boy, I hope you’re a good swimmer.” Keith responded, “Not really, I can dog-paddle alright but I’ve actually never swam much at all.” With that he kicked off his boots, stripped off his socks and shirt, waded into the shallow water and set off for Mississippi.**

* The term I used, “Shreveport to Meridian Manifest” is properly called “The SHME Manifest” in strict railroading terminology. “Manifest” as it it used in the railroad industry simply means a common, regularly scheduled, freight train made up of different types of rail cars and kinds of cargoes.

**Part II of the story has now been published. You may read about it by clicking the link following. In it you will learn of the outcome of this story, and also discover the eventual fate of Keith Wright, a boy I knew as a friend. Keith Wright and The Mississippi River Part II