A typical Western Colorado Cowboy. Notice the Winchester 30-30 Lever Action Carbine in the lariat loop. It is standard equipment for a working cowboy in the west to this day.

Several years ago, the fastest and best *gunner I have ever known, one Ignacio Antonio Romo, and I undertook to carry out a very long survey for a proposed cross country gas line. The line originated in the gas fields several miles west and south of Meeker Colorado, and ran east eventually terminating in the town of Fraser, Colorado. In broad strokes, the job required setting large aerial photo targets, and then conduct a traverse over them tying into state plane coordinate monuments as often as we could along the way. The entire length of all the lines traversed was well over two hundred miles. It was a really big job and a grand adventure to boot.At the time “Tony” Romo and I were employed by a company headquartered in Denver. I was a Senior Party Chief for the company, and was placed in charge of the field operations for the survey by the Surveying Department Manager, Jon McDaniel.Before leaving Denver we had been setup with two Wild T2 theodolites, one Geodimeter model 76 yoke mount distance meter, and a veritable truckload of prisms, tripods, tribrachs, adapters, and so forth.The general technique I employed was to leapfrog traverse through every point if at all possible. Tony would turn horizontal and vertical angle sets, remove the gun, mount the distance meter, and then measure distances back and ahead on every other point. I would occupy the points in between, book his notes by radio, then turn and record my own angle sets. We had our procedure so well perfected that we could be on and off a point in a very short amount of time.We shuttled back and forth between points in a Bell 47D Helicopter, a type which is pretty much the same model helicopter that you sometimes see on the old M*A*S*H television shows. As far as I know, the main difference between the ones you see on that show and the “D” series we flew in, is that our engine was equipped with a turbo – a necessary feature when a pilot is trying to put one skid down to let a surveyor out onto a rocky ledge in the high mountains with winds swirling from every direction.Our pilot was Bert Metcalf, a man who owned and operated a flying service with headquarters in nearby Montrose Colorado. To say that Bert was a character among characters would be putting it mildly. In addition to providing charter services for surveying companies, or anyone else that needed to fly around in the mountains, he was occasionally called upon for a rescue operation, and to supplement his income during the winter season he used his extraordinary flying skill to shoot coyotes for bounty.

At the time of the “official” onset of hostilities in Vietnam, Bert was employed as a chief line mechanic for a major American airline. He was far beyond draft age and had a good steady high paying job. Most people would probably think he had it made. Not Bert. He wanted adventure. He wanted to fly! Not only did he want to fly, he wanted to fly where adventure was – so he just up and quit his job in order to voluntarily join the US Army so that he could learn to fly helicopters. He wanted to go to Vietnam, and he did. Bert, simply stated, was John Wayne in a helicopter.Continuing with the story – though Jon, our department manager, had arranged for a person from our company to go out ahead of our traverse and gain permission for us to go on privately owned land, that did not cure all the “trespass” issues that came up. Much of the land in the western part of Colorado is owned by the US Government. “Grazing Rights” are often leased to ranchers. Our understanding was that those lands were wide open to us and that we did not need any kind of permission to go upon them – in fact we had a work permit from the Bureau of Land Management. The ranchers didn’t care. They didn’t want us flying over or landing on “their” land at all.As our survey progressed to the east a good deal of gossip about our “trespassing” began to circulate among the ranchers and other citizens that lived in or near the small towns we passed through. It seemed to us that we could almost feel hostile thoughts emanating from people surrounding our breakfast or dinner table on the occasions we would take our meals in different cafés along the way.Bert’s wife accompanied us throughout most all of the survey. She was as cool and unflappable a character as you are ever likely to meet. Her job was to drive the fuel truck to prearranged locations so that we could refuel without having to fly very far from the area we were working on any given day.

Her practice was to park fifty feet or so downwind of what looked to her like a good landing spot. That way Bert could swoop in over the top of the truck and land ahead of her with the front of the aircraft facing the required upwind direction. This way of doing it prevented her from having to jockey the truck around. Once we landed, she would just pull straight forward and park on the right hand side of the aircraft, away from the exhaust which was located on the left side of the craft. That way we could refuel with the engine running and the rotor spooling. This technique enabled us to be on our way in just a few minutes. That’s not the safest thing in the World to do, but that’s how we did it. 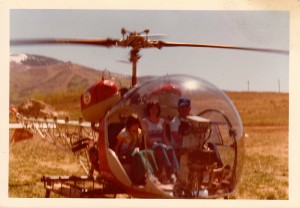 My wife Carolyn and my daughter Vickie going for a short hop.

As earlier mentioned, trouble was brewing among the rancher cowboys in the region. Things finally came to a head one day when they got together and formed up a posse with the idea I suppose of confronting us.

On the particular day that what I am about to relate happened, Bert and I were headed to a fuel staging area that his wife had picked out. As we approached the location we could see some pickup trucks parked on the upwind side of the landing spot. Several cowboys were either sitting on the tailgates of the trucks or they were lounging about close by. Every single one of them had a rifle and some of them had a pistol strapped on – just like in the movies. They were all decked out in appropriate western regalia, replete with cowboy hats, cowboy boots, wool lined vests, snap button shirts, and cowboy cut jeans. They were genuine working cowboys, some were even sporting**chaps and spurs. It was a sight to see as we closed in from above.Whether or not Bert’s wife had spoken with them earlier telling them where to park their trucks is something I don’t know, but I do have my suspicions for I can almost swear I noticed a wry smile on Bert’s face as we passed over the fuel truck. The landing spot was directly in front of us, and the cowboys were right in line ahead of that. There was no wind, or at least no more than a light breeze. It was a perfect setup. Bert couldn’t resist.As we came to a hover just inches above our landing spot Bert hauled up on the collective and twisted the throttle to full power with his left hand while pulling back on the cyclic stick with his right hand. This exercise puts the main rotor blades into maximum thrust, and at the same time tilts the nose of the aircraft up so that the rotor wash is forced forward. In this case the wash was forced forward with wind speeds approaching a category five hurricane. If we were landing into a light breeze it was no match for the kind of angry tempest Bert had set into motion.When the swirling maelstrom hit them cowboy hats went everywhere; at least one of them blew high enough to be swirled over towards us and right down into the rapidly rotating main rotor blades, instantly turning it into small felt pieces; the pickup trucks were rocking back and forth and to and fro so much that the wheels looked like they might bounce off the ground, vests and chaps were flapping so hard they were almost torn off the men wearing them, a couple of blue heeler dogs that were in company tore off at a dead run in search of better climate, the rifles were thrown down so that the former holders could use one hand to cover their eyes and the other to try to keep their clothes on, Bert was smiling, and I was a little bit scared.Bert relented after a little while and set the chopper down. I think I stuttered something like: “You think I ought to go over and talk to them?” I didn’t clearly hear Bert’s response so to this day I don’t know what he said. All I know is that he uttered something as he clambered out of the ship, all the while exhibiting a perfectly measured degree of contempt, and at the same time, conspicuously adjusting the belt buckle on his holster.The cowboys were a weather beaten whipped bunch by that time and not a word had been said to them. I really don’t remember if any one of them came over to talk or not. If they did, they would have talked to Bert. He was armed and experienced. I wasn’t either one. The cowboys were armed but they probably weren’t experienced – not like Bert was.WW II*To the uninitiated the word “gunner” is used at different places throughout the country to refer to one who operates the surveying instrument, which is sometimes called a “gun.” He “runs the gun” so to speak – as a consequence, in some locales he is often called a “gunner.” Other terms one will sometimes hear are “instrumentman” or “i-man” – a shortening of instrumentman.