Sometime ago as I was going about my life in what I suppose was an average way, I answered an incoming call on my cell phone. Upon flipping the phone open I noticed the call was from area code 205. To me, an out-of-state Alabama area code. Now there was nothing particularly remarkable about that, for in our fast paced modern world pretty much everyone I know takes and makes calls all over the country about as often as we talk to a friend across town.

What was remarkable to me was the way the conversation proceeded after my opening “Hello.” The voice on the other end simply said “Hello Wesley this is Woodie” to which I replied “Hey Woodie, how are you doing.” The tone of the conversation and the underlying familiarity with which we communicated was not any different than speaking with one of my two sisters, the both of which I speak with frequently even though they live a long way off.

Woodie, on the other hand is someone whom I have known for over sixty years but have only spoken with a handful of times since our school days. Yet, after those days, and with only a few widely separated and limited conversations over the course of many years, we conversed with each other with the same ease and familiarity that two old friends would have if they had spoken with each other only the day before. There were no introductory explanations along the lines of “do you remember me from when we went to school together” or any such thing like that. She knew I would know her just exactly as we knew each other when we began first grade together all those years ago. We spoke for a few minutes regarding our upcoming 50th class reunion and concluded our conversation.

And so there is the end of that as far as Woodie goes, for she was not involved in the events described in the story I am about to tell you. I have only written those introductory sentences here so that you can have a glimpse into the sort of culture, or perhaps “kinship” is a better word to use, that children from the small town of Marion, Alabama, shared among my beginning class of 1949, and to a large degree, that we still share to this day. I believe that degree of kindred-ship is a special thing that is not common and perhaps even extinct in any group of classmates anywhere that started school together more than two or three years after my group. The monumental cultural changes wrought by the civil strife of the 1960’s and beyond saw to that.

During the school term of 1953/1954 it was always with a certain dread that I would enter my classroom on the west side of Marion Elementary School, walk across the room and stand upon my tiptoes to peer out one of the several large windows that were set into the wall high above the oiled hardwood floor. From this vantage point I would peer across Spring Street to a faded red clay and mixed stone makeshift parking lot that ran slightly uphill from north to south along the edge of the street. The area was bordered on the far west side by a row of scraggly bushes and was only wide enough and long enough to accommodate a few cars parked parallel.

The purpose of this morning exercise, in which I was usually joined by some of the other classmates, all with probably different degrees of emotion, was to stand watch until a black 1940’s vintage five window coupe appeared coming up the hill along West Monroe Street, turned right onto Spring Street and puttered to a stop in the parking area. Our teacher’s car. Upon stopping, a dowdy looking short woman with closely permed curly grey hair, usually outfitted in a black dress, would emerge from the car, open the trunk and go about her morning ritual of removing bricks she carried with her to place behind all four tires of the car. Just common red building bricks. “Brickbats” we sometimes called them back then.

The arrival of Mrs. Henry’s car signaled for me utter despair, for I will here confess that my relationship with her was not a happy one, and if the fault is all mine, then, so it is.

Another of my classmates that in all probability stood watch with about the same sense of foreboding that I did was a tall, slim, freckled, blond haired boy whom I will call Thomas, though that is not the name we called him by at the time. Thomas was a timid sort of boy who spoke with a significant stutter. He was a farm boy whose family most likely lived and worked as tenement farmers upon one of the many farms that surrounded Marion during that time.

It so happened that on a certain day, as vivid in my memory as the moment the event I am telling you about actually happened, Thomas was called to the front of the room to write out a sentence that Mrs. Henry had verbally given to him. I do not remember the words of the sentence actually called out, but given the grade level we were in at the time, it is sufficient to say that it was one similar to “Jack and Jill ran up the hill”  – which Thomas dutifully wrote upon the blackboard:

Upon completing the sentence, Thomas, not realizing he had written the two “N’s” backwards merely turned towards Mrs. Henry to await further instructions. Mrs. Henry then instructed Thomas to read off and correct what he had printed on the board.

Thomas complied in his stuttering kind of way something like this: “Jaaa – Jaa – Jaa Jack! an – an – and Ji – Ji – Jill . . .” and so on until he completed the sentence, but making no effort to correct his writing on the board for the simple reason that he could not see anything wrong with it. Whereupon Mrs. Henry repeated her instructions again. This cycle of trial and failure went on for three or four times until Mrs. Henry gave up in utter frustration and instructed Thomas to sit down. This was followed by a question to the class at large asking if anyone knew what the problem was. Of course by this time everyone in the class knew what was wrong so nearly every hand went up in a bid to be called upon to step forward and make the correction. As an aside I will tell you my hand was not among those eager volunteers.

Somewhere in the midst of this final scene my gaze fell upon some of my classmates. Today I do not remember the names of any of the witnesses to the event for they were different than my beloved first grade class of 1949. Among that class was Lynn, later to be class valedictorian and eventually a successful IT engineer for a large defense contractor. There was Woodie, always admired, fair to everyone, and when grown, successful in life. Thad, a war hero. Kirtley, a military intelligence officer and later a successful lawyer in Marion. And finally, Thomas, who at that moment  was a tearful, hurt, and embarrassed boy. One I knew as a friend that we all called “Franklin Crews” who on May 6th 1968, while serving as a Staff Sergeant in the US Army, was killed during hostile action in South Vietnam.

Thomas Franklin Crews’ name is memorialized upon a bronze placard fastened to a bulkhead skirting the quarterdeck of the Battleship USS Alabama, BB-60. The ship is permanently moored in Mobile Bay, Alabama. 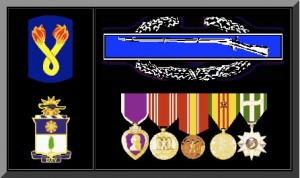 The text shown following is copied from VirtualWall.org under the principal of creative commons.

← Rusty’s Motorcycle
Once Upon A Railroad →