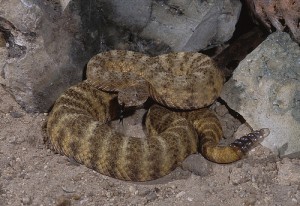 Tiger Rattlesnake (Crotalus Tigris). Endemic only to the Sonoran Desert. This snakes venom is the most toxic of all of the North American pit vipers.Tony, a Snake, a Stake, and Me.

Just south and west of the City of Kingman Arizona lie the northernmost reaches of one of the great deserts in all of the Americas, the Sonoran Desert. It is a vast desert. Bordered on the north by the Mojave Desert, it extends far south into Mexico, and is there bordered on the east side by the base of the Sierra Madre Mountain Range from which it extends westward, interrupted only by the Gulf of California, to occupy all but the northwestern part of the Baja California Peninsula. Within all of that great desert are several sub-regions, each varying to some degree with different climates, types of plants, and wildlife.

The climate is a particularly harsh one, especially in the summertime with daytime air temperatures often exceeding 110 degrees. It is populated with a variety of flora, the principal ones being saguaro cactus, thorn scrub, and creosote bush. As to fauna I am sure there is a wide variety but the only things I recall seeing during the time I was there were birds, buzzards, lizards, a few open range cows, and a particularly unfriendly and venomous species of pit viper: the Tiger Rattlesnake.

It was to this desert that my gunner, Ignacio Antonio Romo and I were sent in the mid summer of 1978 to carry out surveys to mark out placer claim boundaries for uranium finds. At that time energy companies were in a frenzy to make claim to the mineral rights for just about every square inch of available land anywhere that had even the remotest chance of producing economically feasible yields of uranium.

The partial meltdown of reactor number two at the nuclear power generating station known as Three Mile Island had not yet happened, nuclear power was the hot thing of the day, and the energy companies were prospecting for and laying claim to all the uranium rich lands they could.

The practice at the time was for teams of prospecting geologist to go into regions that were likely to contain uranium and identify so called “discovery” locations. Conceptually, the goal was to find a sufficient number of “discoveries” within a given area that would allow them to lay claim to the mineral rights for all of the land in the area so prospected. Claim to these discoveries was made by having as many 600′ X 1,500′ “placer claims” staked out as it would take to blanket the entire area. It was during the staking of one of these claims that I experienced my most dangerous encounter ever with a snake.

Map showing the entire Sonoran Desert. The Arizona Upland Eco Region is shown in yellow. The “X” marks the approximate location of our surveying expedition.

Our daily procedure was to leave Kingman Arizona at about 3:00AM, travel along westbound I-40 to the vicinity of the old Ford Motor Company Yucca Proving Grounds, then exit the Interstate, and take a dirt road that ran for many miles in a southeast direction alongside the western base of the Granite Mountain Range, eventually arriving on the job site at just about sunup. By doing this we were able to put in about five hours work on the ground before the fierce summer temperature forced us to give up for the day and return to our motel in Kingman.

On most mornings, by the time we actually set to the work of running out a claim boundary line the sun would be well above the horizon and the temperature would have already started its steady climb to the one hundred degree plus mark. This worked out reasonably well for us when it came to dealing with the tiger rattlesnakes known to populate the area in large numbers. The reason for this is because tiger rattlers are primarily nocturnal creatures so they do most all of their hunting for prey at night, and seek shelter from the blazing sun during the day by crawling into or under some natural structure such as a rock crevasse or rock out-cropping.

At first thought this kind of behavior, unlike that of the copperhead I told you about in episode II, might seem to work out very well for a surveyor out stomping around in the desert. That is until you come to that part about crawling under some natural shelter during the daylight hours.

Tiger rattlers are not known to inhabit a flat desert floor very much, preferring instead to survive and carry on their society in desert areas that are populated with mounds and small hills made up of protruding bedrock and scattered boulders of varying sizes. As it happened, these were just exactly the kind of geological formations Tony and I were surrounded with while running a survey line close to the base of the Granite Mountain Range about 9:00 in the morning on a summer day in 1978.

Our practice during the running of one of these lines was to take turns between *head chaining and tail chaining by exchanging roles at every 600′ interval. By the use of a 300′ fiberglass measuring tape our practice was that the head chainman would carry a cutting tool and only one stake with him, and he would only carry that if the next point to be set was an actual stake point. If the next point was only an intermediate measurement point he did not carry a stake – he would simply tie a small strip of surveyors marking flagging onto a bush at that point. After this was done the tail chainman would “come ahead” to remain at the stake or intermediate measurement point that had just been set.

By alternating this way, the turn of events was that Tony had just set the next to last stake for the line we were running. It was now my turn to go forward 300′ and tie a piece of flagging onto a bush to signify an intermediate measurement point. Tony had in his possession the only remaining stake to be set. 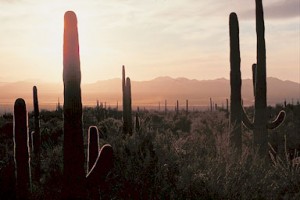 A sunrise like this is a daily occurrence in the Sonoran Desert. Temperature at this time of the morning is usually quite chilly. Temperatures reaching or exceeding one hundred degrees are only a few hours away though!

The stake Tony had just set was positioned at the base of a flat boulder about two or two and one half feet high that was protruding out a foot or so from beneath a small hill of several other boulders perhaps ten or twelve feet high. It provided a small ledge to step up on to gain purchase to crawl and climb on up, nearly vertically, to the top of the little hill of boulders. By a combination of rough measurement and estimation we accounted for the short horizontal distance from the stake to a point on the top of the little mound. The plan was for Tony to then move up to that point to direct me on along the survey line from that vantage point to fill out the remaining distance.

I placed my foot upon the little ledge and stepped up, coming to an almost off balance standing position with my chest almost touching part of the boulder pile in front of me, with my eyeballs peering into a cavity under a boulder that contained another set of eyeballs not even two feet away staring straight back at me that belonged to a really big, coiled up, buzzing, tiger rattlesnake!

Still watching the snake and listening to its continuously buzzing rattler I very slowly eased my head back and made a barely perceptible turn while slowly extending my hand toward Tony, who had upon hearing the snake positioned himself so that he could also see it. With my arm extended, my hand held out, and my lips moving far less than the most skilled ventriloquist I whispered, “Tony give me your stake.”

Realizing that then was not a good time to engage in conversation, I slowly stepped down from my perch and out of striking range of the snake. Tony, rapidly chewing a piece of gum as he seemed to almost always do, in a moderate tone said, “we’ll just let that snake live – he ain’t hurtin’ nothin’.

I occasionally think of those parting words uttered by Tony, and every time I do I realize that one could make a pretty good argument about whether it was me that let the snake live or if it was the other way around. 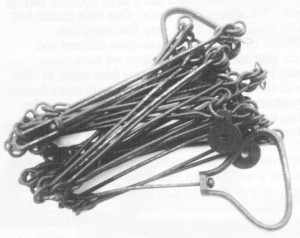 *It is likely evident from the surrounding context that the terms “head chainman” and “tail chainman” refer to the position of the men along the line being measured. The term “chainman” may not be so evident however. Surveyors of a bygone day used a measuring device that was called a “chain.” This was because it looked similar to a common porch swing chain, only with very elongated links.