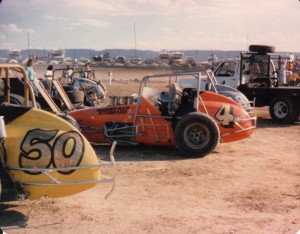 Sometime during the summer of 1979 several Colorado sprint car regulars, myself included, towed up to Black Hills Speedway in Rapid City, South Dakota. Our purpose for doing so was to participate in a special open wheel event held there, for sprint car racing was not regularly done at that track at that time. I can’t recall all of the names of the drivers that went along, but one person that I do recall was a fellow driver by the name of Harold Maynard. Harold’s car, number 50, is shown in the picture to the right. My car, number 4w, is in the background. As I recall, it was a fairly uneventful event except for something that happened during one of the heat races.

Those of you that are familiar with sprint car racing know that races are almost always held at night on a clay track that has been watered down and packed smooth so that the surface is tacky. 600 horsepower sprint cars can really get going on a track like that. Such was not the case at this particular race. Not only was the race held in the early afternoon of a hot summer day, but the track had not been adequately watered or packed down. Whatever tackiness there might have been went away during hot laps. After time trials were completed the track was as slick as an ice rink.

I think every driver there spun out at least once, including me. One of my spin-outs (assuming I had more than one – which is likely) took place coming off of two – that’s right, I said OFF of two – in fact, way off of two – about midway down the back-stretch to be honest. I don’t know how one spins out in the middle of the back stretch but trust me, I managed.

Here’s where things got interesting – but first let me explain to those of you that might not be knowledgeable of the workings of a Sprint Car or Midget that they don’t have starters, flywheels, or clutches folks. If you spin out, and in the process kill the engine, you don’t just crank them up and drive out of danger. If you are in some part of a banked turn, and you are turned the right way, you might be able to snap the in/out box loose and roll to the infield, but if you are sitting (cross-ways) in the middle of the flat back stretch at Black Hills Speedway in Rapid City, South Dakota, you get to sit right where you are until a push truck comes to your rescue.

I’ve had my share of watching the little missiles (other race cars) coming at me while sitting dead still in the middle of a track and I’m here to tell you, one never quite gets used to it. Now I don’t want to come off as overly dramatic about all this because it’s usually not all that much of a problem; the yellow is thrown, you hold your breath for a bit while a few cars pass within an inch or two of you at breakneck speed, or at worst (usually) they see you at the last moment, swerve to try and avoid you, and instead slide sideways into you. Sometimes that’s not too bad, and at other times, well… you get the point. Whatever the outcome, when the push truck can safely get on the track you will be pushed off, go to the back of the pack, and start over whenever the flagman gets everyone lined up and throws the green again.

So there I sat – right in the middle of the back stretch and cross-ways on top of it, watching the cars coming toward me off of two at, flat out, full tilt, race speed. They kept coming, and coming, and coming. I don’t recall how many times I saw some of the same cars more than once, but it was enough to make me realize that something was not exactly right. Somehow this realization caused me to turn my head in the direction of the flag stand which was clear across the infield on the far side along the front stretch.

What I saw was a sight to behold and one I will never forget. The flagman was vigorously waving the yellow flag with one hand AND the GREEN FLAG with the other. All I could think was – what the hell does that mean? I can tell you what my fellow racers must have thought it meant; Go faster! That’s what.

Somewhere along the way my friend Harold Mainard who was not racing that particular heat ran from out of the infield and across the front stretch to reach the flag stand. Upon getting within earshot of the flagman he shouted: What are you doing! – What does yellow AND green mean! The man replied in a shout, “it means continue racing, but race with caution” – to which Harold replied: Caution hell! We race with reckless abandon! Throw the damn yellow!

He did, and here more than thirty years later I have written this little story for you.

← A Flight to Tampa