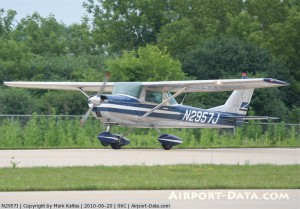 Flying an airplane, at least a small one, is not all that difficult. You pretty much taxi it from the ramp to the runway, point it reasonably straight down the centerline, make sure the elevator trim is not too badly misadjusted, apply full power, keep a little pressure on the right rudder pedal, and the thing will just go right on up, up and away. After the wheels leave the ground, as long as you don’t let the nose get too far above the horizon, don’t jack it over too far and pull back on the yoke while turning out of the pattern, or make a few other critical mis-steps you will eventually get up to a nice cruising altitude. Once that is accomplished you can fly all over the place without exposing yourself to much danger at all. The problem of getting the thing back on the ground still remains, however.

This is commonly called “landing.” In terms of comfort, landings can range anywhere from a smooth chirp-chirp  of the landing gear to a bone rattling controlled crash. In my case, most of my landings have been smooth and uneventful, however some have ranged outside the parameters that most people would use to define a “normal” landing. One comes to mind that falls into the controlled crash category, and that is what this story is about.

The final step in acquiring a private pilot license in this country is to successfully complete a “check ride” with a duly authorized Federal Aviation Administration examiner. One of the many training requirements leading up to the final check ride is the completion of a rather lengthy multi-leg cross country journey. A trip I made that entailed travelling from my home base at Ft. Lauderdale International Airport to Daytona, Florida, then to Tampa International Airport, and then from Tampa back to my home base at Ft. Lauderdale easily satisfied the minimum FAA requirements. On the morning of March the 4th, 1973 I arrived at the Fixed Base Operators office, completed all the pre-flight necessities, boarded a Cessna 150, number N2907J, and set out for Daytona.

As I recall, the trip up to Daytona was uneventful aside from a little patchy ground fog. I had worried that such a thing might impede my ability to land at a small airport along the way should I have any sort of in-flight emergency. No such emergency was in the offing, so I landed at Daytona, fueled up, had a cup of coffee and a snack, and took off for Tampa International Airport. As with the short journey from Ft. Lauderdale to Daytona, the trip across to Tampa was also uneventful; the ground fog had completely cleared off, and the day was bright and sunny. Things were going real good – so far.

Some miles northeast of the Tampa airport I made contact with the control tower and requested permission to land. I was approved to approach “straight in” to what is now runway 19L. I began my descent, and in just a few minutes the runway came into view. By this time I was down to the prescribed pattern altitude of 800 feet, and had already started to apply the flaps, so I announced to the tower that I was on “final for runway one nine left.” A short, cryptic reply something like: “two nine zero seven Juliet – clear to land – one nine left” was received. Good. No announcements like: “make good time – be advised Delta heavy on final behind you” were included in the last message from the tower, so I could take my own sweet time and put that bad boy Cessna right down on the numbers. Never mind that a Cessna 150 can land in only a few hundred feet, and runway 19L was a whopping 8,300 feet long.

About this time I must have thought: Bosh! there was no need to use up all that runway! – I’ll just set down before the numbers – way before. I decided I was going to put that thing as short of the numbers as had ever been done. Why? Because they were there; that’s why. Reader, you have probably determined that things were getting ready to take a turn for the worse about that time. You are right.

Beginning pilots are taught a simple two step trick they can use to insure that they touch down reasonably close to where they intend to. It works like this: 1) focus on the white runway designation numbers; 2) if the numbers begin to appear to move towards you and under the nose of the airplane you are too high – reduce throttle and trim the elevator wheel a little bit; the glide path will steepen, and the numbers will freeze right on the nose if you do it just right. If the numbers appear to move away from you and above the nose of the aircraft you are too low. Just do the opposite – apply power to lessen the steepness of the glide path.

A normal landing almost always consists of a more-or-less continuous adjustment of the glide path; it’s rarely a set it and forget it type of operation. By the way, rarely do you actually land on the numbers if that is the point you chose to “freeze” the end of your glide path on. You usually touch-down a considerable distance beyond the numbers. This is because of a phenomenon that develops when you get real close to the ground that is known as “ground effect.” That’s a fancy way of saying there’s a sort of rolling bubble of air under your wings that is compressed a bit. Since airplanes generally land with a considerable “nose up” attitude this means the wings are inclined also. This “bubble” of air is being sort of pushed along by the inclined wings and has to go somewhere, so some part of it rolls up over the leading edge of the wings and provides “lift” to the aircraft. This additional “lift” makes them want to keep on flying. That’s why you seem to glide a long, long way down the runway when you land in a passenger jet. Okay, enough with the aeronautical course already. As you’ll soon find out, I’m not qualified to teach it anyway.

So there I was, bent on touching down on the first few feet of the runway. So what did I do? I picked the very end of the runway as my focus point. In a perfect world everything would have worked out just fine; the ground effect I spoke about in the previous paragraph would have carried me fifty or a hundred feet down the runway past my focus point and I would have landed somewhere short of the numbers, or at worst right on them.

As I passed over Hillsboro Boulevard I had full flaps on and was intently focussed on the very end of the runway. At just about that time my eye caught the airspeed indicator – not good. I was right down to stall speed and settling. I was in a predicament there was no escape from, and I knew it. I couldn’t surrender altitude for airspeed by lowering the nose because, well, there wasn’t any altitude left to speak of, and I couldn’t apply any power to get a little altitude because I had already firewalled the thing. This is called being “behind the power curve.” The only thing I didn’t do was panic (well, not completely) and pull the yoke back to gain altitude. That would have resulted in an instant stall and a straight down drop of fifty feet or so. There’s no telling how much damage would have been visited upon me and the aircraft if I had done that.

KaBang! I was on the ground – one hundred feet or so short of the runway! Through a combination of reasoned intention and sheer panic I managed to haul the yoke back in order to keep the nose wheel up. I think the sheer panic part of the last sentence caused me to rotate my feet forward on the rudder pedals thus applying the brakes – locked solid. Folks I mean LOCKED!

Locking ones brakes on a small airplane is not normally all that bad of a thing. In fact, you use one brake at a time to lock a wheel while making tight turns in the ramp area, so you really can’t hurt much. Well, that is until we come to that part about the end of the runway sitting about eight inches above the surface of the earth. That’s a different story.

After my initial really hard contact with Mother Earth I bounced and skidded forward with my nose in the air, and my main gear in intermittent contact with the ground. Unfortunately luck wasn’t on my side when the main gear got to the end of the runway. Both wheels struck it simultaneously; the wheels didn’t spin one iota, but the tires and tubes did. Yep, that ‘s what I said; the wheels stayed as stationary as an anvil and the tires and tubes spun right around them. This resulted in clipping the valve stems of both tubes off just as clean as a chopped carrot. It also resulted in two tires as flat as a tortilla and a little rougher ride than normal over the first hundred feet or so of the runway. I didn’t abuse the remaining 8,200 feet.

Somewhere along the way I had managed to kill the engine with the magneto toggle, so there I sat. Not knowing that the tires were flat, after a moment or two I decided the thing wasn’t going to blow up, so I decided to crank up and taxi right on off like nothing ever happened. To my surprise the thing fired right up – but – it wouldn’t move an inch. In just another moment the air traffic controller advised me to “take the first turnoff and taxi to the ramp.” I replied advising him that the thing wouldn’t move, and that I needed to get out and see if I could find out what was wrong. He advised me to do so. After discovering that both main tires were flat it was with a pretty sheepish voice that I called the tower to tell them what was wrong.

When all was said and done one of the fixed base operators sent a pickup truck loaded with two dollies and a rope to tow me in to their shop for repairs. Somehow the driver and I managed to jam the dollies under the flat tires, attach the rope to the nose gear, and through a series of unexplainable gyrations make our way to the shop. Two new tubes and $200 or so later I made my way toward Ft. Lauderdale. On the way I heard every rattle, snap, pop and crack that an airplane can make. I thought the engine was going to fall out with every sound, but it didn’t, and I arrived safely home well after dark.

Thirteen days later, on March 17th, 1973 I passed my check ride with a score of 90. I don’t know where I lost 10 points – probably on landing proficiency. WW II

← Once Upon A Railroad
A Memorable Race in South Dakota →